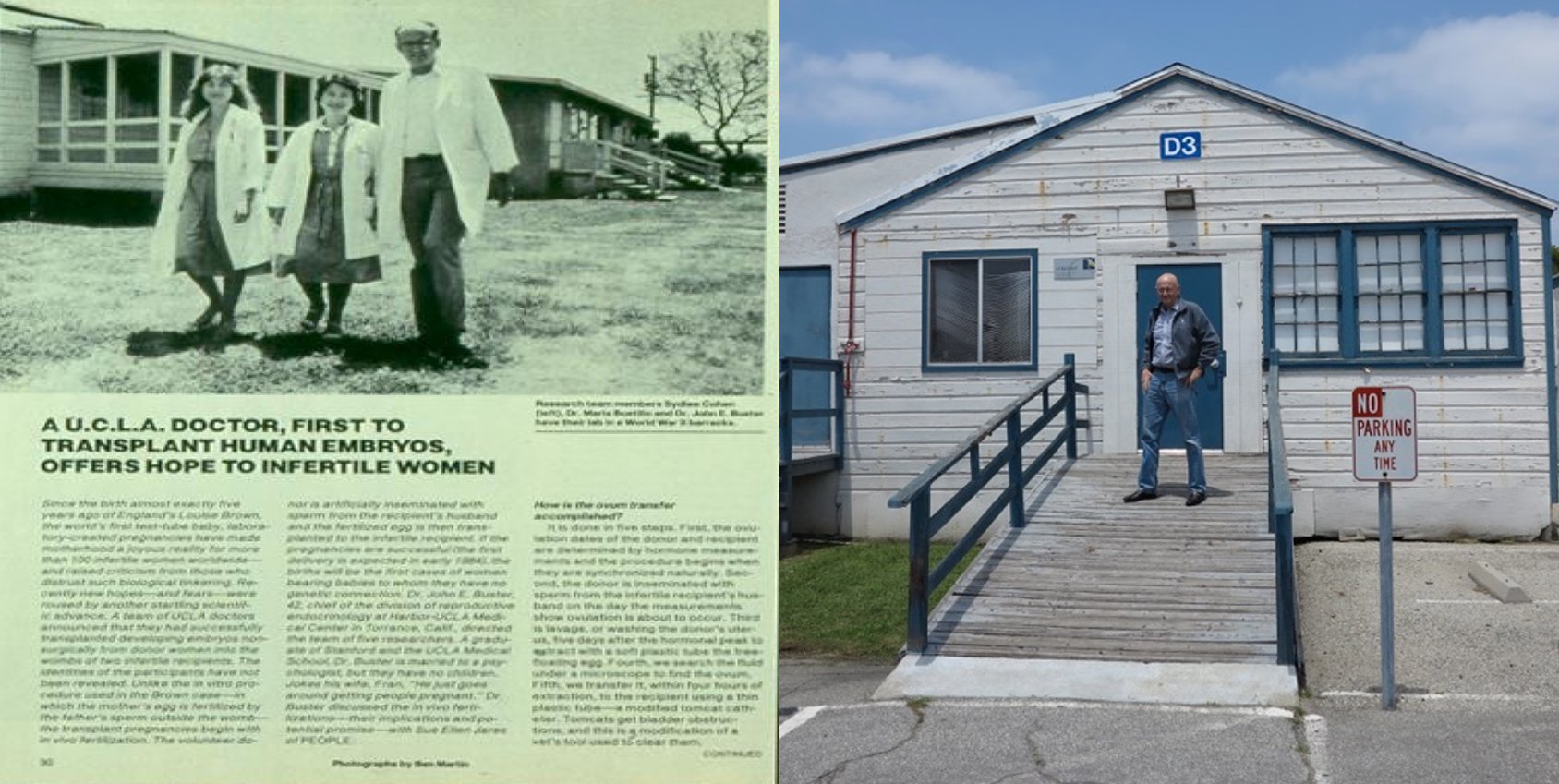 On the left: Dr. Buster with researchers Dr. Sydlee Cohen and Dr. Maria Bustillo posing for a photo in People magazine in 1984 following the first successful human embryo transfer. On the right: Dr. Buster revisiting the lab 30 years later.

Looking back to my earliest days of studying and practicing medicine in the 1960s, it is nothing short of astounding to reflect on how far we’ve come in the field of reproductive medicine with fertility treatment. In truth, reproductive endocrinology and infertility (REI) as we know it today did not even formally exist when I finished my residency in obstetrics and gynecology at UCLA in the early 1970s.

Today, well over a quarter million babies are born each year across the world thanks to in vitro fertilization (IVF) alone. At first the subject of intense controversy and public outcry, these miraculous children once deemed “test tube babies” are now relatively commonplace. And technology is continuously improving to expand our ability to help infertile men, women, and couples achieve parenthood through IVF and other methods.

In the grand scheme, it was really not long ago that couples struggled with the heartbreak and devastation of infertility in secret and shame, without much hope to cling to. When I entered the field as an Ob/Gyn, our treatment options were limited, as was our understanding of the factors contributing to infertility. I distinctly remember women coming in for their appointments and conveying the absolute heartbreak and disaster of each menstrual cycle that indicated another failed attempt at pregnancy – another month of fruitless struggle.

The genesis of IVF

Outside of a few loose-knit societies and fringe researchers, doctors didn’t really start talking about infertility as a medical issue until the 1970s. One of the first real breakthroughs was the discovery that regular menstrual cycles were a good marker of ovulation in women. This led to the development of Clomid, a medication that stimulates ovulation and is still widely used today.

The real breakthrough came in the summer of 1978, when after years of experimentation and research (much of which was highly controversial at the time), British physicians Robert Edwards and Patrick Steptoe achieved the first successful birth from IVF. Louise Joy Brown was born in Britain to ecstatic parents Lesley and John Brown, for whom parenthood would have been otherwise impossible due to Lesley’s deformed fallopian tubes.

Perhaps equal in fervor to the elation of Louise Joy’s arrival was the uproar and scandal it unleashed. As IVF made headlines and entered the public consciousness, many religious leaders forbade it because they thought a baby made in a laboratory dish was not natural and was a work of the devil. These doctors and scientists fighting to overcome barriers to parenthood were accused of nothing short of testing the will of God.

Innovation from an unexpected source

As IVF became more and more widely practiced, success rates remained fairly low. In the initial years, they hovered around five percent. One of the important advancements in IVF was the implementation of superovulation – giving the female patient medication to stimulate the development of multiple eggs. Clomid was used at first, then gonadotropin, then a drug called Lupron, which allowed hyperstimulation to occur while preventing premature ovulation. This allowed for the fertilization of multiple eggs during one IVF cycle leading to the transfer of multiple embryos, upping the odds of a successful pregnancy but also increasing the number of multiple births (twins, triplets, or more).

In those days, preimplantation genetic testing was yet to be developed, so we had no way to evaluate the health of the embryos before transfer. It became standard practice to transfer multiple embryos in hopes that one would implant. Still, success rates were modest at best, dangerous multiple pregnancies were commonplace, and the cost of treatment was prohibitively expensive for many patients.

The front page of the February 3, 1984, Los Angeles Times newspaper, one of many media outlets that announced our team’s exciting achievement.
In the early 1980s, my team at UCLA began to explore alternative treatment methods that might lead to higher success rates and potentially be less invasive and expensive for patients. The source of our big breakthrough was perhaps an unusual one. We discovered a compelling method that was being used by cattle breeders. The ranchers were harvesting embryos from prized cattle and transferring them to carrier cattle using a technique called uterine lavage.

Uterine lavage employs a suctioning catheter, which is inserted vaginally into the uterus. Fluid is delivered into the uterus and then drawn out along with the embryo (or embryos) to be transferred to the carrier. We adapted this bovine technique to human medicine, developing a special uterine catheter designed to carefully wash out human embryos from a donor’s uterus to transfer to another woman.

The first successful pregnancy resulting from the transfer of an embryo from one human to another was performed by my team at Harbor-UCLA Medical Center in July 1983, right around the time Louise Joy Brown was celebrating her fifth birthday. We used sperm from the patient’s husband to fertilize an egg in the donor by way of artificial insemination. Once the embryo began to develop, we successfully transferred it to the infertile patient using uterine lavage, carefully matching the hormonal cycles of the donor and patient. The resulting birth in February 1984 made international headlines.

This was a landmark development for women who, for any of a variety of reasons, could not produce their own eggs but still wished to carry and give birth to children. Moreover, this in vivo technique (in vivo means fertilization occurs within the body as opposed to a petri dish) required no surgery, and pregnancy success rates soon eclipsed those of IVF, approaching 60 to 70 percent.

Unfortunately, our work with uterine lavage was suspended indefinitely in 1991 because of the HIV/AIDS crisis. Risk to prospective donors was deemed too high, and this exciting technique was largely abandoned for many years. It is only in recent years that it has been picked up again and applied in some new and exciting ways (more on that below).

The rise of genetic testing and the modern era

As we moved toward the late 1990s and into the new millennium, IVF evolved as the principal fertility treatment method, getting better and better each year. Preimplantation biopsy of embryos was first developed in the 1990s and has seen widespread adoption in recent years. This has allowed us to carefully select embryos for transfer, avoiding birth defects, miscarriages, and multiple pregnancies in the process. Genetic testing is still an extremely active area of research in reproductive medicine.

While much more widely accepted in modern times, advanced reproductive medicine has still occasionally been the subject of public scrutiny and media controversy. Perhaps the most notable example is that of Nadya Suleman, known more widely as “Octomom” after giving birth to eight children in 2009 following an IVF cycle in which a dozen embryos were transferred.

This of course was an extremely ill-advised departure from best practices on the part of Nadya’s fertility doctor. Thanks in large part to the development of preimplantation genetic testing, we strongly advocate for transferring just one embryo to protect the health of mom and baby. But Suleman’s case nonetheless underscores the fact that reproductive medicine remains a lightning rod for controversy, and physicians and researchers working in the field must be careful stewards of their work.

Back to the future of fertility treatment 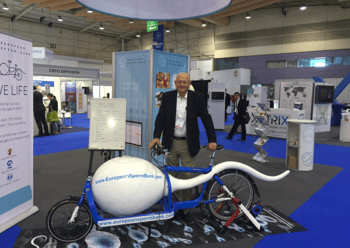 Posing for a photo at the European Society of Human Reproduction and Embryology in 2015.

Today, my work in reproductive medicine has made a full circle return to uterine lavage and in vivo fertilization. My colleagues and I are developing technology to combine preimplantation genetic testing with uterine lavage, allowing practitioners to evaluate the health of embryos using a noninvasive and affordable technique. The implications and potential are nothing short of exhilarating.

Couples at risk for passing on dangerous or life-threatening genetic disorders can now detect genetic abnormalities in embryos. Testing embryos with lavage provides the same information that women currently receive in fetal testing methods including NIPT (non-invasive prenatal testing), amniocentesis, and CVS (chorionic villus sampling). Uterine lavage allows women to avoid the emotionally difficult decision of whether or not to terminate a pregnancy should test results indicate a genetic abnormality.

The power of preimplantation genetic testing, which is currently only available to couples undergoing IVF fertility treatment, may be far more accessible in the not-so-distant future thanks to a device found on a cattle ranch that sparked an idea that changed the history of fertility treatment. It is truly an exhilarating time to be in the field of reproductive medicine.