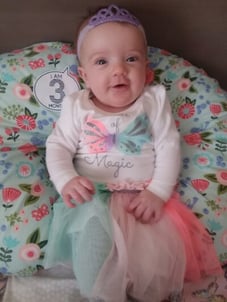 Danielle and her husband, Di, did everything right. They started trying to have a baby together when Danielle was 30. They went to preconception appointments and got the all clear from their physicians. They started taking all the right vitamins. They didn’t expect any problems, especially because Danielle has a son from a previous relationship, whom she had without any problems.

But Danielle and Di would face multiple miscarriages, emotional trauma, difficult physicians and many unanswered questions on their journey to become parents together.

When Danielle and Di got pregnant quickly, they thought it was a sign that this would be an easy pregnancy. The couple excitedly went to their first ultrasound at seven weeks. The ultrasound technician found the baby’s heartbeat but, rather offhandedly, mentioned it was slower than anticipated. When Danielle questioned that, she got little information.

“No one really said what that meant,” she recalls. “They just told us that the doctor would call me. When he did, he still didn’t make it seem like it was a problem.”

Without more information, Danielle was told to come back in a few weeks to check in. Since no one in the office seemed concerned, neither was she, and she thought everything was alright. Unfortunately, that was not the reality.

The couple returned to the clinic to learn they had lost the baby. The heartbeat was no longer slow, it was not present.

“We had no idea that could happen to us,” Danielle says. “I had heard people had miscarriages, but I didn’t think it would happen to me. We were young, healthy, free of any underlying problems. But it did.”

Danielle’s experience is one many women face. Miscarriage occurs in 15 to 20 percent of all pregnancies.

After recovering from the miscarriage, both emotionally and physically, Danielle and Di started trying to get pregnant again. This time, things weren’t so easy. It took almost six months before they got a positive pregnancy test.

“We didn’t even make the first appointment until I was eight weeks pregnant,” Danielle remembers. “We wanted to get beyond where we were with that first loss.”

Trying to start with a clean slate was important to the couple. They also chose another obstetric provider, with a new ultrasound technician who was ecstatic to let them know their baby had a strong, perfect heartbeat. Danielle and Di were thrilled and thankful.

The couple went on to get a blood test to determine if the baby had any abnormalities, which were all negative, and found that they were having a little girl. They chose to name her Faith.

Other than the anxiety and some morning sickness, the pregnancy was unremarkable and healthy. The couple were excitedly waiting for Faith’s arrival, sharing their joy with friends and family.

Danielle, who worked in a hospital, was about 20 weeks pregnant when she was working an extra shift – overnight – and she began to notice the baby was not moving quite as much as she had been.

Thinking she was just paranoid, Danielle talked about her options with her coworkers. They discussed going to the maternity ward at work, maybe the emergency room and so on. Ultimately, Danielle worked the shift and then called her physician, whom she was going to see later in the day anyway. He told her to come in early, just to ease her nerves.

Instead, things began to unravel quickly. Danielle’s doctor couldn’t find Faith’s heartbeat. Danielle had an ultrasound and remembers knowing at that moment she had another miscarriage.

“They pulled the baby up on the screen and I could tell,” she recalls. “There was no movement, no beautiful color flow. It was nothing. My baby was gone.”

Because Danielle was so far along in the pregnancy, she had to deliver the baby.

Di and Danielle decided to have an autopsy done to try to identify what, if anything, they could learn from Faith about why the miscarriage occurred. Danielle also had an extensive workup. Unfortunately, they didn’t learn anything from any of the tests or the autopsy.

“After the tests, my doctor didn’t think I needed to look into it anymore,” says Danielle. “Living through what I did once was traumatic, living through it twice was beyond traumatic. I didn’t feel comfortable with his answer.”

The couple found a new obstetrician who recommended they visit Women & Infants Fertility Center, specifically Dr. Carol Wheeler. Dr. Wheeler’s expertise is not all they found at Women & Infants’ Hospital.

Danielle and Di met with Dr. Wheeler to discuss their options and, once more, try to identify what was going on and how to prevent it. Dr. Wheeler and her team did a full work up, but they learned nothing new. But that didn’t mean it was the end of the road for Danielle and Di.

Dr. Wheeler suggested a simple plan: baby aspirin and a progesterone suppository. To Danielle, this didn’t seem like enough, but a Fertility Center nurse told Danielle she had seen it work. The nurse also recommended acupuncture. According to the American Society for Reproductive Medicine, acupuncture has been shown to promote relaxation.

Searching for support and puppy love

More than relaxation, Danielle and Di needed a space to talk about their experience. Understandably, both were having a very difficult time processing the miscarriage that happened to them. The couple found a support group for parents who have experienced miscarriages and infant death.

“We met other couples who were just like us. They were healthy and really wanted to have a baby, then lost their babies,” Danielle says. “It made us feel not alone and that nothing is truly wrong with us. That we weren’t deserving of that happening to us.”

The couple went to the group every Wednesday for a year. Danielle says it gave her a place to remember Faith. “After a while people expect you to move on. They think like, the baby was never really here so it should be easy to move on.”

It was just as profound as losing any other loved one because Faith was loved, says Danielle. Having a space to talk about the miscarriage was crucial for Danielle and Di.

In addition to the support group, the couple also decided to get a dog. After the loss, Danielle and Di had a strong urge to nurture and care for something. They settled on a mini bulldog, named Mina, the Portuguese word for little girl, who became Danielle’s constant companion.

Over the next year, Danielle followed Dr. Wheeler’s guidance. She also started acupuncture and a low-inflammation diet. During that year, Danielle had three chemical pregnancies, meaning that by the time she went into the office for an ultrasound, she had miscarried. These very early pregnancy losses usually occur before the fifth week of pregnancy.

Despite these early losses, Danielle continued to work with Dr. Wheeler.

“It was tough to focus on anything,” she says. “After five losses, you can’t keep your mind on one thing. But Dr. Wheeler kept us on our plan.”

That plan ultimately helped Danielle and Di get pregnant once more. The couple was hesitant to celebrate or get excited because of the many disappointments they endured. But at five weeks they went into Women & Infants Fertility Center for an ultrasound, almost three weeks earlier than a typical OB practice would perform one. From there she continued to go into the office and see Dr. Wheeler at least every week.

“Dr. Wheeler was reassuring but realistic,” says Danielle. “She kept me focused on right now. She continued to remind me that everything looks great today and that’s the most we can do. Today, the baby is great.”

The couple continued to be cautious, not having a baby shower, gender reveal or telling many people. Danielle said Mina, her puppy, and the TV show The Walking Dead were the only things that kept her anxiety at bay during this time.

Those two things, in combination with Dr. Wheeler’s care, seemed to work for Danielle and Di. The pregnancy progressed as normal and once they were beyond the 20-week mark, which is when the last miscarriage happened, the couple finally told their families and were soon showered in love and baby gifts.

“We didn’t take the tags off or buy anything on our own,” she remembers. “This baby was so wanted, by not just us, but everyone around us.”

Sadly, Mina would not make it through Danielle’s entire pregnancy. Mina had some medical complications late in Danielle’s pregnancy. The puppy developed lymphoma and passed away shortly before the baby was born.

“That dog came into our life when we needed her the most and then right as we were about to have this baby, she left our lives,” recalls Danielle. “She was there for us and I can’t explain it but it’s almost like she served her purpose.”

After four years, five miscarriages and the loss of a special furry friend, Danielle and Di finally welcomed Sydney Faith into the world in December 2018. Sydney is a healthy baby who, despite some last-minute shopping for a crib, has all she needs.

“While I was in the hospital recovering from the C-section, Di was running around buying things,” recalls Danielle, laughing. “The moment she was born, we got so many gifts and flowers, and people were so loving and generous. People checking in and wanting to meet her. We felt the love.”

Danielle believes focusing on the present and finding activities that make you happy are important for anyone dealing with similar issues. Shifting focus to things that make you feel good and you can control are key, she said.

“If you focus on everything that is going wrong, you’re making it take longer. The emotional stress makes it take longer,” Danielle says. “Yes, have the right support and treatment, but have things that make you feel good emotionally.”